The Grim Reaper as an iconic image and character has lived in popular culture for time out of mind. This image of death is depicted in art, in music and in film. If you mention “The Grim Reaper” to someone, they immediately get a picture in their head of a skeleton wearing a black hooded cloak carrying a scythe. Now, death has been personified by civilizations for thousands of years but I don’t believe another depiction has stood the test of time like The Grim Reaper. 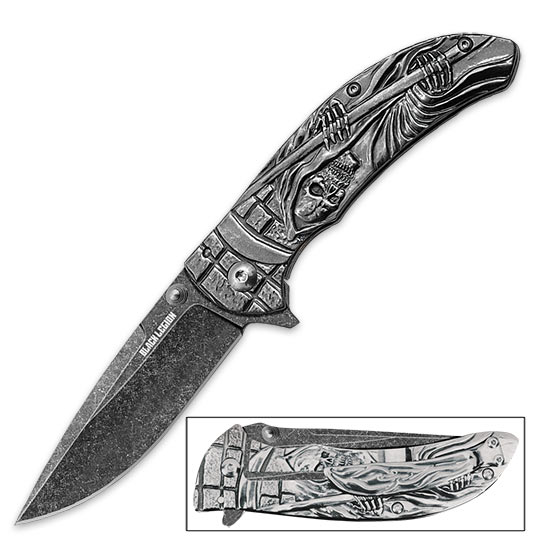 This is the folder Death would carry.

This is the folder Death would carry.
During the 15th Century, in England, our iconic figure’s visual appearance was first given life (irony intended). Most likely, it was bred from the fear and horror brought on by the Black Plague. (Actually, the title, “The Grim Reaper” wasn’t used until 1847 in a Wisconsin newspaper.) Once established, this personification of death was perpetuated by the church and by writers of the Middle Ages and beyond.

In honor of this ever present, iconic figure that permeates our culture, I have put together some items that Death himself couldn’t resist. Don’t fear the Reaper!

Imagine for a minute that Mr. Grim was wearing pants underneath that cloak of his. Now, if he was, the Grim Reaper Stonewash Folding Pocket Knife is what he would have in his pocket. With Black Legion’s impeccable eye for detail, even Death knows it’s a great everyday carry. The outstanding feature is that its blade has a stonewash finish to compliment the Grim Reaper design on its handle. 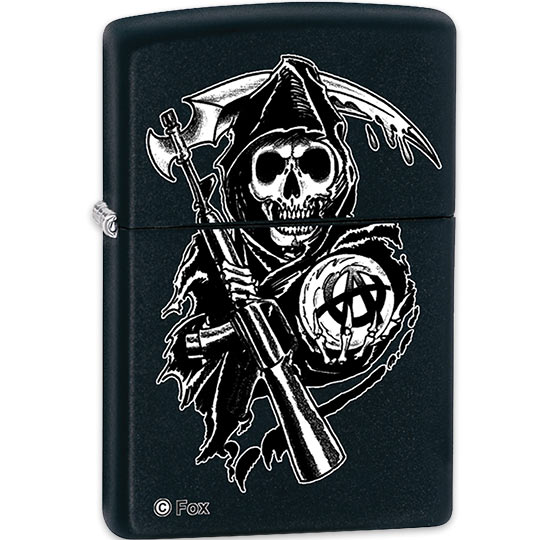 Fan of the show? You need this Zippo!

Fan of the show? You need this Zippo!
The Reaper has made himself quite at home on film and on television over the decades. In the past few years, his likeness became the symbol of a fictitious motorcycle club, “The Sons of Anarchy”. If you’re a fan of this show and hated to see it end, keep the flame alive with Zippo’s Grim Reaper Lighter As always, keeping the flame alive won’t be difficult with Zippo’s patented windproof design. The case is matte black with the Reaper portrait leering out at you. Best of all. This lighter is made in the U.S.A.

What creeps me out the most about the familiar image of the Grim Reaper is his long, skeletal fingers at the end of those bony wrists protruding from his black sleeves. It’s just the thought of him gliding up behind me and putting one of those fleshless claws on my shoulder to let me know he had come for me. But just think how much more horrifying it would be if he was wearing our Grim Reaper Hand Claw Set. Three stainless steel blades, ending in piercing points, jut from between the “skeletal knuckles” of each gauntlet. The details in the “bony fingers” are frightening. These are great cosplay accessory items or just home display conversation pieces for you collectors out there. 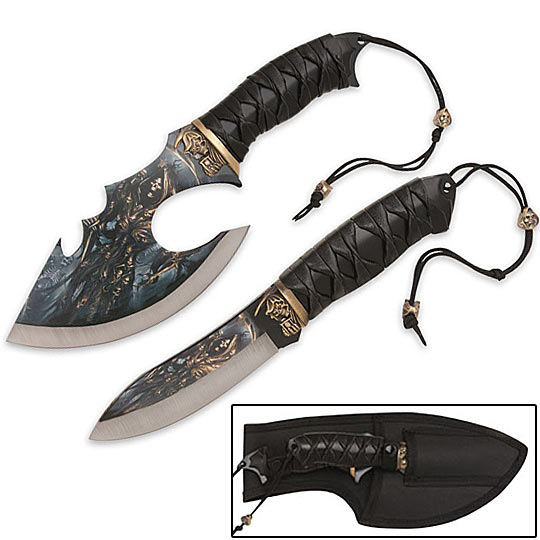 This knife set is a great collector's find.

This knife set is a great collector's find.
And speaking of collectors’ items, if you’re a collector of death personified illustrations, take a look at our Grim Reaper Fantasy Knife Set and see how the blades have been used as the canvas. The set includes a cleaver and dagger, which have been full-color printed with artwork featuring the Grim Reaper. These are seriously beautiful pieces with their Samurai sword inspired handles and cast metal accents. Assuming that Death would be a collector of artifacts and depictions of himself (because he’s vain), you would find this set in a prominent position in his crypt or wherever he chooses to relax on his days off.

Last but certainly not least, I can honestly say that should Mr. Reaper ever need to replace his mighty weapon that splits soul from body, he can get our Grim Reaper Monster Scythe. And at 80 inches long with a 23-1/2 inches carbon steel blade, it would make even Death proud. Folks, don’t be fooled. This is a weapon with a seriously sharp point attached to a two-piece (Couldn’t see how we’d ship it otherwise) hardwood handle. If you are looking for something to make a statement, then this is definitely the item for you because any way you slice it, it’s just really impressive.