Applies to delivery within the 48 contiguous states only.

*This item is excluded from express shipping

*This item is excluded from express shipping

Bird of a different feather
The noble crane - so filled with otherworldly grace that kung fu practitioners imitate its delicate, fluid movements. Chinese legend says a great crane ferries the dead to the afterlife on its sweeping wings; cultures around the world believe cranes to be bringers of longevity and good luck to the living. With its resilience, sleek lines and near-mythic feel, Sokojikara's "Soul Crane" Katana is the legendary crane, personified. The hand lacquered saya depicts the stately bird through vibrant, radiantly hued traditional Asian art, and like a giant crane soaring on the wind, this lovingly handcrafted sword is truly a sight to behold. The Soul Crane is beautiful, eye-catching and no doubt impressive from the very first glance. But many of the sword’s greatest treasures lie beneath its striking visual facade, and some - like clay tempering - are even altogether intangible. The Soul Crane is a veritable swordcraft goldmine, never ceasing to yield rich sword-wielding experiences from the moment you first grasp the tsuka to your inaugural cut and every time you brandish it beyond.

Made of blood, sweat, tears, and premium 1065 steel
Sokojikara developed the Soul Crane with the serious swordsman in mind. Master smiths painstakingly hand forge every blade, and seasoned artisans carefully hand etch and paint every saya. From vigorously hammering the formless, molten steel to gingerly tapping in the tiny wooden mekugi, every step in the Soul Crane's construction receives the utmost care and precise attention to detail. Some of the world's - and history's - most revered, time-tested techniques are employed, and every material is top-of-the-line. A quintessential example is the Soul Crane's potent 1065 tanto blade. One of the most sought-after high carbon steels in modern swordcraft, 1065 alone would yield a blade with a nasty bite. But the Soul Crane takes it a step further, enhancing the blade with a time honored differential hardening technique called “clay tempering.” Unique to traditional Japanese swordcraft, clay tempering was developed centuries ago by Edo-period smiths and is integral to the katana's longstanding, well-earned reputation as the sharpest sword on earth. A 1065 blade may have a “nasty bite,” but a clay tempered 1065 blade like the Soul Crane’s is nothing short of devastating. And the “devastation” persists, battle after battle, cut after cut…

Seasoned hands yield “sharpest sword in the world,” clay tempering ensures it stays that way
Clay tempering imparts edge retention that's simply without equal. Like a koi gliding through a still pond, the Soul Crane's blade slices through rolled bamboo tatami mats and even cinder blocks cleanly and effortlessly, suffering neither crack nor fissure and all-the-while retaining its razor sharp edge. The Soul Crane can withstand such punishing cutting trials thanks, largely, to clay tempering. Prior to the intense heat of the hardening phase, Sokojikara's seasoned swordsmiths coat the newly formed, unrefined blade with clay - a thin layer along the edge, a thicker layer on the body and spine. When the blade emerges from the hardening forge, the clay layers' contrasting thicknesses cause the steel to cool at slightly different rates, yielding two distinct hardness regions. The less-insulated edge cools faster, making it harder for superior edge retention and shear strength. The thicker, more insulating coat of clay causes the body/spine to cool more slowly, rendering it "tougher"- less brittle, more flexible and better equipped to absorb impact energy. Though conceptually simple, clay tempering requires skilled hands and years of experience. It’s a slow, labor-intensive process that has changed little since its 15th century origins. But when you see the Soul Crane in action, you’ll undoubtedly agree it’s well worth the time and effort.

Experience the Soul Crane, then pass it on
Sokojikara’s Soul Crane Katana performs well beyond its price tag and holds its own against any of today's most expensive katana, outperforming many. But the old cliché is true - "action" does indeed "speak louder than words," and at this unbeatable, downright unheard of price, why deny yourself the opportunity to experience Sokojikara's Soul Crane Katana for yourself? No matter how you use it, with proper care you can enjoy it for a lifetime, then pass it down to your children, grandchildren or great-grandchildren! The Soul Crane is heirloom-quality and built to be treasured by generations of your descendants - your legacy preserved in hand forged steel.

The Lord of the Rings Sting Sword of Frodo Baggins

The Lord of the Rings Glamdring Sword Of Gandalf

The Lord of the Rings Anduril Scabbard

Staff of Gandalf the Grey

The Lord of the Rings Witch-King Sword


Just...WOW...Very beautiful and very sharp,sturdy and balanced weapon im very impressed with this sword and tbh,this would put El Cheapo mall swords to shame you really need to know a thing or two about swords to really understand how the true potential and beauty this sword really holds if you buy it w you won t regret it


As deadly as it is beautiful. The girlfriend doesn't mind that I'm going to hang it on the wall because it looks great. This is my first real sword and it's great. My only complaint is mine has no visible boshi I'm thinking because the kissaki didn't get the final polishing. There's a few teeny tiny nicks in the kissaki that I feel it wouldn't have if it had gotten that final polishing. I'm not even taking off a star for it because I still love the sword. I'm going to polish the kissaki myself which should remove those micro nicks and bring out the boshi, I feel I could see it under certain light but the lesser polish on the kissaki is noticeable to me but I'm a freak about details. Either way this thing is a razor. I trimmed my bushes with it, they just fell away. It cuts paper, in fact if you hold the paper right you can just kinda lop off pieces. I tried and failed to cut a plastic apple sauce bottle, sent it flying across the yard like I was playing T-ball. Real solid hit and the sword took it, tried a couple more times but I couldn't do it. I bet the sword in more skilled hands could though, thick plastic. I only cut half way through. The blade is good I think, you're really paying for the artwork though, it looks great. You could get more blade for the money going with Cheness, and I'll probably add some of them to the collection eventually but I wanted something unique to start it off. Didn't buy on here, tried to but they were out of stock and canceled my order on me. I loved it so much I thought I'd leave a review though.

This is my second sword purchase from True swords, and I am now a customer for life! My first was the Masahiro Shadow Warrior.Both are fine weapons but the superior quality, craftsmanship and attention to detail of the Ryumon were evident right out of the box.It is easy to see why Ryumon swords are considered top of the line. After thoroughly cleaning and oiling the blade, (which is the finest I've ever seen by the way) I put the Pheonix through a few Iaido kata and found it to be well balanced and comfortable to handle.Both of my swords will be used regularly but the Ryumon is hands down my favorite. The only mistake I can see that True Swords has made with this incredible weapon is underpricing it, but that's their loss not mine. Wish I could give it six stars but there are only five.

I use this sword for kata and cutting. It is beautifully balanced and cuts well, air and cutting mats alike. The Koiguchi was not cut properly and required some manual shaping, but it was very minimal and ultimately was probably made that was for a snug fit. I would definitely recommend this and it is well worth the price.

Fantastic blade, great feel, and all in all real god craftsmanship, doesnt come with the wooden box though, but most sertainly worth the money.

This sword is absolutely amazing very very well worth the 300 bucks for it. i tested it by throwing a wet rag in the air (the water was to make it a little heavier) and letting fall against the blade. the rag went in 2 upon contact. there are no problems with the sword save for one: when you first get it, the bamboo pegs holding the hilt together are very tight and hard to remove. after a while, they should loosen up. there are a couple things not mentioned in the description though: the saya shows a heron with a long blue tail that wraps around the saya, and there is a heron stamped into the pommel of the hilt, and into the fuchi just below the tsuba. it is worth the $300, and it comes sharp. mine had a smudge on the blade, but it was easily removed after i cleaned it. True Swords, your a bomb, keep it up!

We won't be able to ship this item until we receive more stock. But don't worry, we've found a similar item that's ready to ship now.

Thanks! This item is in your Cart.
Engraving:
Get more and have all for each!

Product cannot be added to cart. 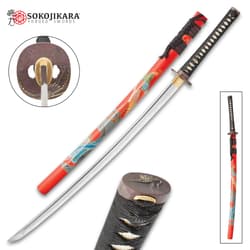