How to Carry a Katana on Your Back

Traditionally, the Samurai class carried their katanas at their sides, held in place by their obis (sashes). The Samurai were all about presentation and their weapons were included in that. They were as much a part of their dress as their clothes were and the way their katana was positioned in their belts bore distinctive meanings. The only weapon they would have carried on their back would have been a nodachi, which was a sword too long to wear comfortably at their side. Since, these swords weren’t practical for close-quarters fighting, often they were used by fighters on horseback. 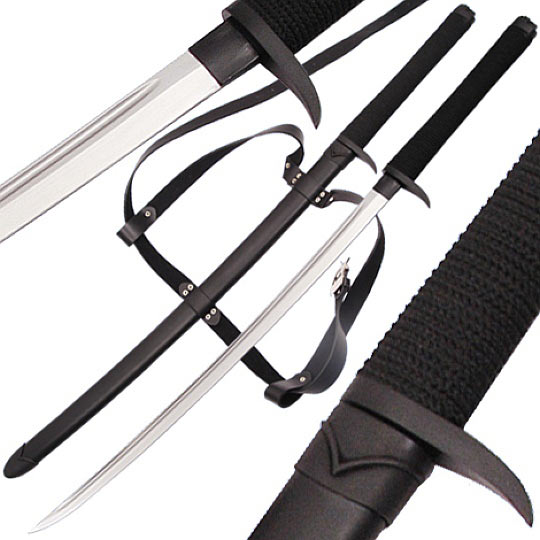 A katana with a double strap system.

A katana with a double strap system.
In contrast to the Samurai class, the Ninja class were all about stealth and invisibility. By carrying their katanas across their backs, the sword was effectively out of their way for other activities like climbing and crawling. It has been said that they had also adapted a way to draw their katana from that position but there are also scholars who say this was not possible. And, since very little historical documentation, aside from drawings, can be found about the secretive Ninja class, this will always be disputed.
You can give this concept a try yourself by strapping a katana to your back, just for fun, to practice ninjutsu or to complete a costume. There are a couple of routes you can take if you want to practice carrying a katana strapped to your back.
If you don’t already own a katana, the thing to do is purchase one like the Death Talon Katana which has a double strap system that comes with it. If you are a collector of television or show memorabilia, another good one is the Hiro Nakamura Sword, which includes a leather back strap.
If you already have your trusted katana, then, you can purchase a back strap system separately with one strap or two. Which one you choose just depends on what you think will fit more comfortably on you. The double strap system lets you slide your arms into the straps like you’re putting on a vest and your sword will rest vertically on your back. The single strap system lets you slide one arm into the strap like you’re carrying a satchel and the sword will rest at an angle across your back. 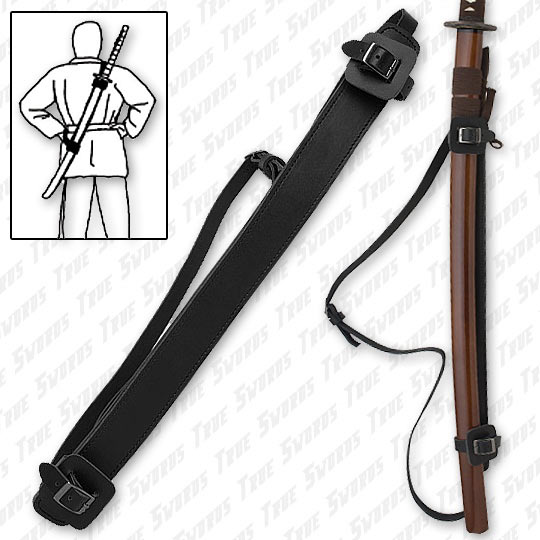 This is a single strap system.

This is a single strap system.
If you want to give it a go at making your own, you can do that by attaching a leather cord to your scabbard. You will create a strap to put over your shoulder by tying both ends of the cord securely around the scabbard just below the handle of the sword. When you hold the top of the large loop that you have made, the sword should hang in a vertical position. Then slip one arm into the strap you’ve made and pull it down and around so that instead of resting at your side, the sword is positioned on your back. When you turn your head one way, you should see the top of your sword and when you turn your head the other way, you should see the bottom of the sword pointing down at the ground.
In the grand scheme of things, if you have already invested in a beautiful katana, I would also invest in a back strap system instead of making one myself. For one, a leather cord is not the most comfortable thing to have cutting into you with the weight of your sword. Of course, you could use a length of silk, which I have seen done, too. But if you don’t have a length of silk lying around your house and you have to buy it … then…
Just remember, that you want your katana to be safe and secure so that it’s not damaged by falling on the floor because you thought it was tied tight enough. The lacquered scabbard can be scratched and I know you wouldn’t want that to happen.