What the #$!%[email protected] is Clay Tempering?


Some of you out there may not know what it means when the description of one of our swords says that it has been “clay tempered.” I didn’t know either, when I first started. I mean it could have meant, as far as I knew, that it was tempered by somebody named “Clay.” So, for those of you who aren’t sure what it means, here it is in a nutshell. 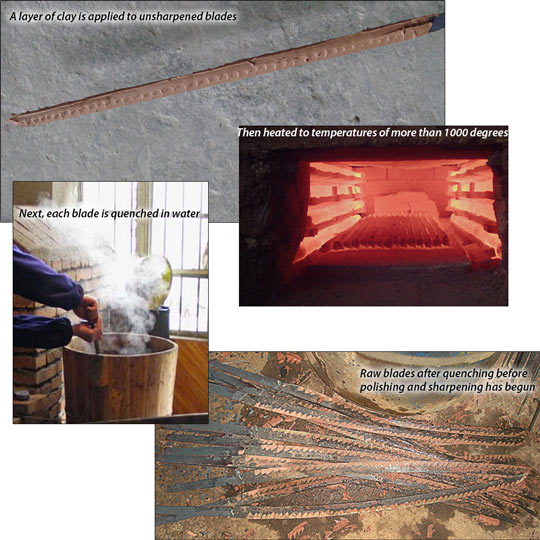 Clay tempering gives a sword both flexibility and hardness.

Clay tempering gives a sword both flexibility and hardness.
Heat treating is what the overall process is called, when you take a piece metal and use heat to craft it into the blade that you want. It consists of three steps – annealing, hardening and tempering. The first step in the process is to take the steel piece and heat it and cool it slowly to soften the metal and that is the annealing process. This makes the metal easier to shape and work with but since we are making a sword, we want it to be strong, so, the next thing is the hardening process. 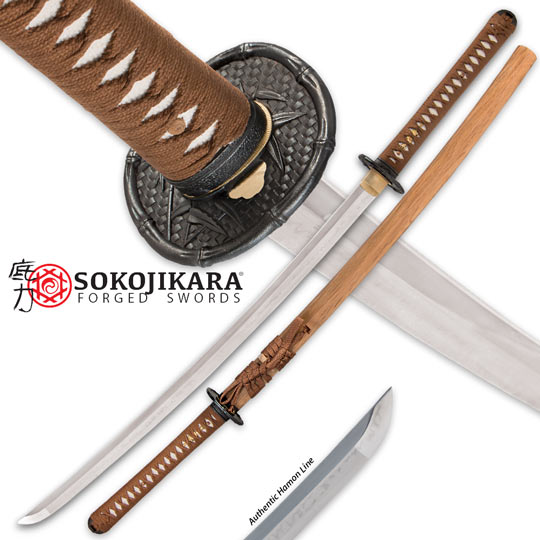 This beautiful katana has been clay tempered.

This beautiful katana has been clay tempered.
This can be done by heating the piece of metal, like a sword, evenly to red-hot and then quenching (rapidly cooling) the entire thing so that it’s uniformly very hard. Quenching is done in either water or oil. So, what happens is the steel goes from soft to incredibly hard in a very short time and you have a very rigid blade but, unfortunately, it’s also brittle. When you are crafting a blade, you do want the edge of it to be very hard because it will hold its sharpness but if the entire blade is like that, it will break if stressed too much. However, in a sword, you don’t want the hardness of edge that you would have in a knife’s edge because the greater the hardness of the edge, the more brittle the metal is there. Because a sword is a weapon that would, conceivably, come into contact with bone, swordsmiths of old would sacrifice some of the sharpness of for a sturdier sword edge. In a sword, you can give hardness and sharpness to the blade’s edge and flexibility to its spine by using the differential hardening process.

So, now, we come to the age-old process of, what is called “clay tempering”, which is the process of using clay to insulate the parts of the metal that you want softened so that when the sword is heated and quenched, they cool more slowly. So, the exposed areas like the sword’s edge cools quicker and the clay covered areas cool slower during the quenching process. The clay is painted on the blade rather thickly on the spine and can be a mixture of clays, ashes and salts. The composition of the clay mixture, along with the thickness of the application and temperature of the water, are elements of the process that can be individually adjusted to produce a specific desired result.

The last step in the entire heat treating process is tempering the blade. What tempering does is reduce some of the “excess” hardness of the metal that was achieved during the hardening process. This is important because, once again, you need the metal to have a certain amount of flexibility (toughness) so that it’s not so brittle that it would break. So, after the clay is removed, the entire blade is heated up again but not as hot as before and it is allowed to cool back down slowly. The edge of the blade still retains more of its hardness than the rest of the sword because of the clay-tempering process that it went through. You can actually see the difference in hard and soft metal because there is a visible temper line on the blade, also called the hamon.

The end result is an incredibly crafted blade that has both strength and flexibility, which is the hallmark of a high-quality sword. When you add an elegant ray skin and cord-wrapped handle and an intricately designed tsuba, you get a katana that is a masterpiece of perfection like our Sokojikara Forged Swords.