You Need to Train with a Bokken

I know that “I’m preaching to the choir” to a majority of you on this subject but I also know that there are still quite a few of you out there who really need to read this and take note.

So, you bought that beautiful katana and it is magnificent. It has the traditional cord-wrapped and rayskin handle (tsuka) and a guard (tsuba) that is intricately designed. The blade is a masterpiece of high carbon steel honed to razor-sharp perfection. You just want to … you just got to … swing it around and let out your inner Samurai. Now, hold on Grasshopper. First you must train. Get yourself to a martial arts school that specializes in Kendo or Aikido or, at the very least, buy a DVD to watch. When you do, the first thing you will learn is that you won’t be picking up that katana for quite some time. You’ll be using a bokken or a trainer, as it’s sometimes called. 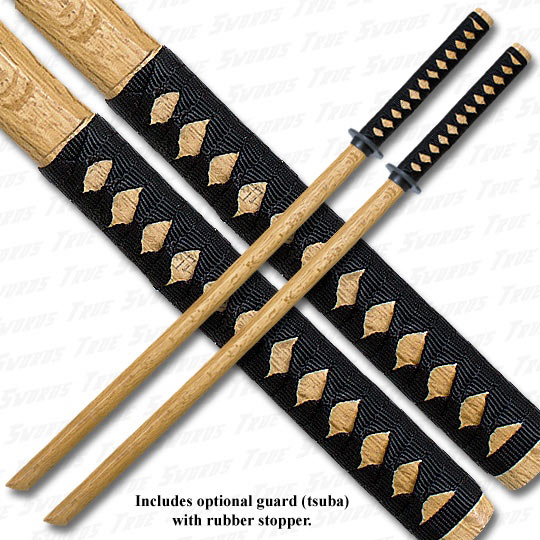 Traditional bokkens are made of wood.

Traditional bokkens are made of wood.
A bokken is a wooden sword used for training that is basically a mock-up of a real sword with a tsuka or handle and a tsuba or guard. It’s used so that you really get the feel of handling a live-edge sword without the risk of injury. In essence, you can get used to the weight and shape of a sword as you maneuver through the exercises or katas (choreographed patterns of movements).
A word of caution, though, bokken aren’t used for sparring (practice fighting) because they can inflict serious injury. When it comes down to it, you are holding in your hand the equivalent of a club or baseball bat. It can break bones, inflict internal injuries and cause concussions if it makes contact with someone. There’s a story of a Japanese sword master who used a bokken that he had shaped from a boat oar to kill his sword-wielding enemy. So, it may not be metal and have a sharp edge but it can still be lethal. 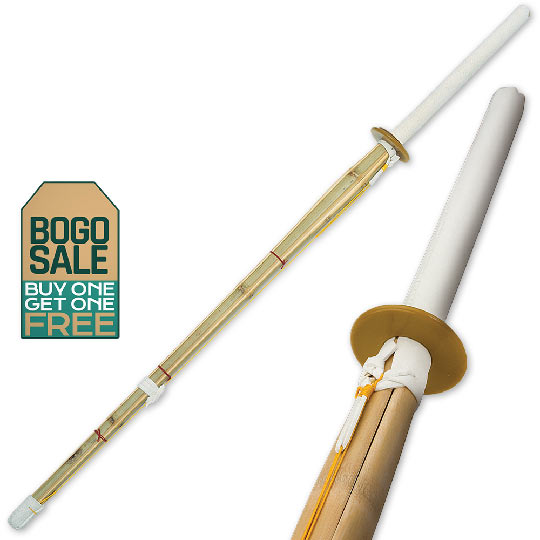 Sparring should be done with a shinai.

Sparring should be done with a shinai.
If you are interested in primarily sparring, then, you need to get a shinai, which is a bamboo weapon that represents a Japanese sword. It simulates the weight of a katana but is fashioned in a way that the force of impact on a body is greatly reduced so as not to inflict injury.

Bokkens can be made in any sword shape and size including katana (long sword), wakizashi (short sword) and tantos. Now, they can also be found constructed out of polypropylene (a heavy-duty resin). Some purists prefer the traditional wooden trainer but I think the disadvantage is that they have the possibility of wearing hard over the years. Practicing two-person katas where they may make contact with each other is one thing that will take its toll on the wood. Especially, with beginners who are still learning control. The main thing that will take its toll on the wood is when you or your youth student consistently drops it on the dojo floor or a few times out in the parking lot when you’re trying to get all of your gear out of your car (Two words for you: gear bag. Think, the size of a baseball bat bag). Dropping it just happens sometimes and, after a while, the wood will start to show it with nicks and scars. 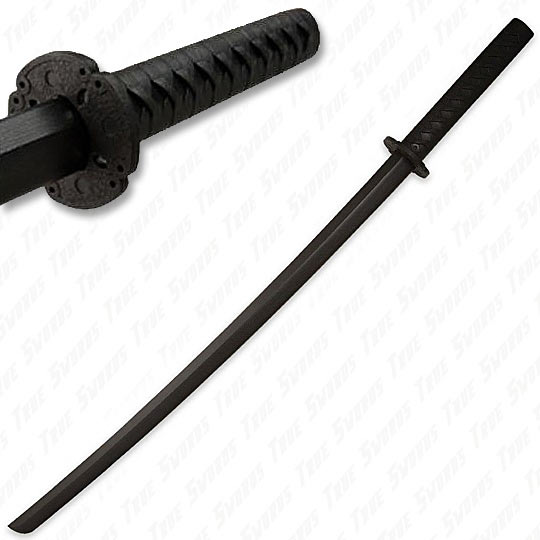 A polypropylene bokken is made to last.

A polypropylene bokken is made to last.
On the other hand, the poly bokkens are much more able to take the wear and tear and will definitely fare much better if you drop them in the parking lot. But just because they are made of resin, don’t assume they aren’t as capable of inflicting the same damage to someone as a wooden bokken.
When you train with a bokken, the entire purpose is to avoid the danger of a sharp-edge because there are numerous opportunities to nick yourself or your partner when going through an exercise or kata. There are numerous opportunities to accidentally clip someone who’s not paying attention in class. So, if you’re looking to cut the cost by skipping the trainer because you just know you will be really careful, think again. A trip to the ER to get stitches or worse will definitely cost you more than even a high-end bokken will cost you. Hey you! Yeah you, the one self-learning by watching a DVD or the how-to YouTube videos. Please remember this! All in all, when it comes to cost, you can usually get a pair of trainers packaged together at a really good price. The poly ones will be a little bit more than the wooden ones.