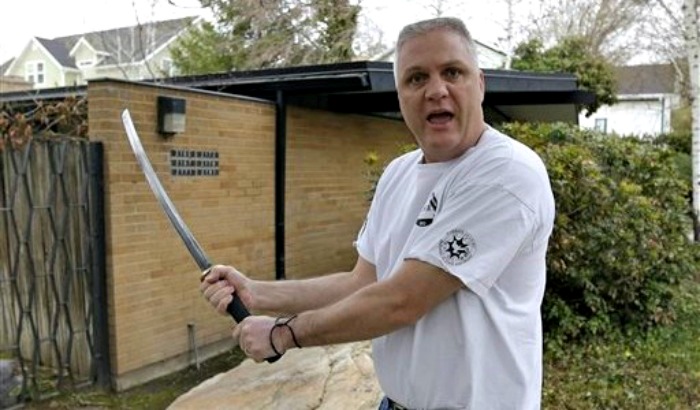 Now, I do not advocate using a sword as your primary home defense. The reality is that a gun has a better range and is, most of the time, quicker. I’ve also heard that, when it comes to a would-be burglar at your door, there’s no better deterrent then the sound of a 12-guage being racked. It’s quite a distinctive and easily recognizable sound. All of that being said, there have been incidents, over the years, where swords have been effectively used against home or business intruders. Here are a few of my favorite episodes. Click the headlines to read the full stories. 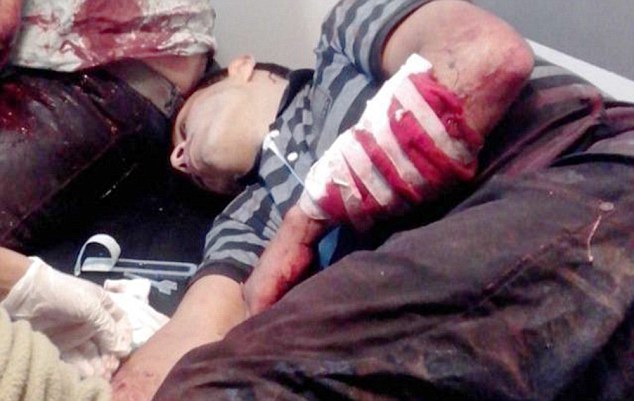 These crooks got more than they bargained.

These crooks got more than they bargained.
1. He was hacked-off
Number one on my list is an incident that happened earlier this year in Argentina. So, basically, four armed robbers thought they would break into Mr. Costa’s home in the early morning hours. What they didn’t expect was to come up against a Samurai sword. Mr. Costa hacked pieces out of the burglars (Yes, pieces, one article said.) and they fled, wrecking their car in the process because the driver was too injured to drive. When you look at the photos, it looks like a blood bath, folks! Bottom line: They all ended up in intensive care between the car wreck and injuries received from Mr. Costa and his Samurai sword. Maybe, they will choose another profession, going forward. They will sure have the scars to remind them of their failed robbery attempt.

2. Hell hath no fury
One Indianapolis woman took the opportunity to try out her Medieval combat skills when an intruder showed-up in her hallway. After punching him several times, she grabbed her Japanese combat sword to hold him at bay on the floor until the police arrived. Jacob Wessel, the intruder, who was high as a kite, must have thought he had wandered into a bad martial arts movie.

3. Better luck second time around
After being roughed up and robbed in his apartment, an Ohio man decided “enough was enough” when another attempt was made three weeks later. This time around, though, Alex Fluhardy was waiting armed and ready with his Samurai sword when the intruders kicked in his apartment door. He immediately attacked, injuring one of them by hitting him in the head and arm. Deciding they were outmatched, the crooks fled the scene. Police were able to catch up with one of the suspects at the ER later. The first robbery and the second attempt were unrelated. Mr. Fluhardy just seemed to be having a run of bad luck.

4. Brought a knife to a sword fight
What I love about this criminal versus sword story is that the would-be robbers were just simply “out-bladed”. If you insist on dressing like a Ninja to rob a convenience store, then, at least carry a Ninja Sword. The perp. brought a foot-long knife, instead. Well, the cashier was having none of that and the Ninja-robber found himself being chased out of the store with a really, really big sword. He was lucky it wasn’t a gun because the clerk had one of those at his disposal, too. I guess the lesson here is: Don’t bring a knife to a sword fight.

5. Can he get a raise please
Defending your home against a burglary is one thing but defending your workplace to the extent that Anthony Brisbane did, absolutely deserves a raise! A security guard at Captain Steamer’s Oyster Bar in Daytona Beach, he armed himself with a broken rapier when he found a masked intruder in the restaurant’s kitchen. He jabbed the criminal in the stomach and tried to hold him there while he called the police. The suspect hit him in the head with a tire iron and then it was “on like Donkey Kong.” During the fight, the poor security guard sustained cuts to his hands from the rapier but, in the end, he came out on top. He traded the broken sword for a screwdriver and marched the would-be robber outside to wait for the police. Unfortunately, the cuts from the rapier were rather severe, so, I hope he had a good health plan – or is that covered by Worker’s Comp? 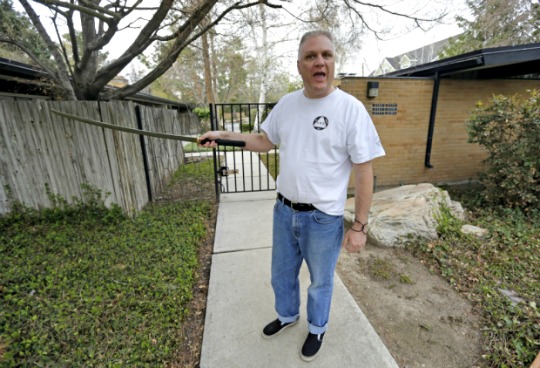 Don't mess with this black belt.

Don't mess with this black belt.
6. The Good Samaritan
I like to call this incident: The Good Samaritan with the Samurai Sword. Kent Hendrix rescued his neighbor from a criminal stalker when she was attacked in front of her house one morning. The perp. took her keys and tried to get into her house but was foiled in his attempt by the fourth-degree black belt. Mr. Hendrix’s son witnessed the attack and ran to wake up his father, who jumped out of bed and grabbed his Samurai sword. The surprised assailant quickly gave up and fled the scene in his car but to no avail because, being strong in mind as well as body, like any good Samurai, Mr. Hendrix had memorized his license plate number. As a parting shot, the black belt yelled this fact out to the fleeing criminal and the perpetrator, realizing he was caught, turned himself in about an hour later. 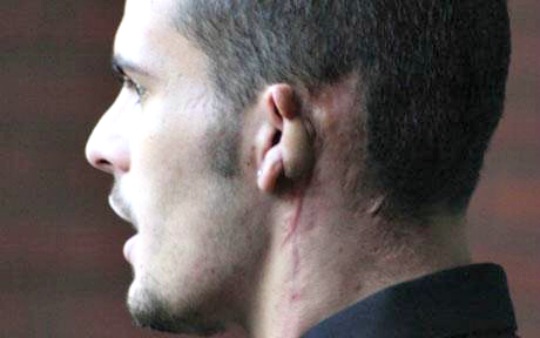 The intruder bears the scar forever.

The intruder bears the scar forever.
7. Lend me your ear
Now, I do find this final incident troubling. Apparently, in the UK, if you defend your family and home, with a sword, against an intruder, you could be prosecuted. Okay, so, David Fullard did cut the would-be robber’s ear off but we all know how it all could have been avoided in the first place. Believe me, if you enter my home looking to rob me, your ear is definitely fair game … or anything else that gets in the way of me defending my property. After a nine-month (Yes, nine months.) legal battle, the home owner was finally cleared of “unlawful wounding.” So, remember, when you pick up any kind of weapon, be it sword or gun, in defense of your home, there could be legal ramifications. I suggest that you check your state’s laws and see exactly what your rights are and if you don’t like what you see, petition your legislature for change. Stepping off my soap box now.