Ninja Weapons and Tools of the Trade

Images like this one portray the ninja as dressing in all-black.
Images like this one portray the ninja as dressing in all-black.
During the 15th century in feudal Japan, the ninja became a primary player in the unrest of the "Warring States" period. Ninjas were hired mercenaries and spies, who used covert methods of combat to accomplish their primary duties, which were sabotage, espionage and assassination.
After they faded out around the 17th century, they were featured prominently in folklore and legend in Japan. This makes it difficult to separate fact from fiction, sometimes, but what is known is that they were recruited from the lower class and were trained to be secretive about their existence. This was in direct contrast to the samurai, who were aristocrats and placed value on open displays of honor and valor.
So, basically, ninjas were hired to do the dirty work that the aristocrats didn't want to touch. To this purpose, during the wars of the 15th century, ninja families organized into larger guilds, claiming territories to work in. Also, a system of rank existed where an "upper man" represented the group, a "middle" man assisted the boss and a "lower man," carried out the missions.
Popular media portrays ninjas as wearing all-black apparel. However, there is no written proof that they were dressed in this manner. This portrayal is probably because of early drawings that showed them dressed in black to symbolize their "invisibility". More than likely, they were dressed as civilians so they could more effectively blend in to the general populous. Some of the documented civilian disguises they adopted were priests and monks, entertainers and fortune-tellers, and as merchants. This also allowed them to travel unheeded between political boundaries or spy in enemy buildings without rousing suspicion. 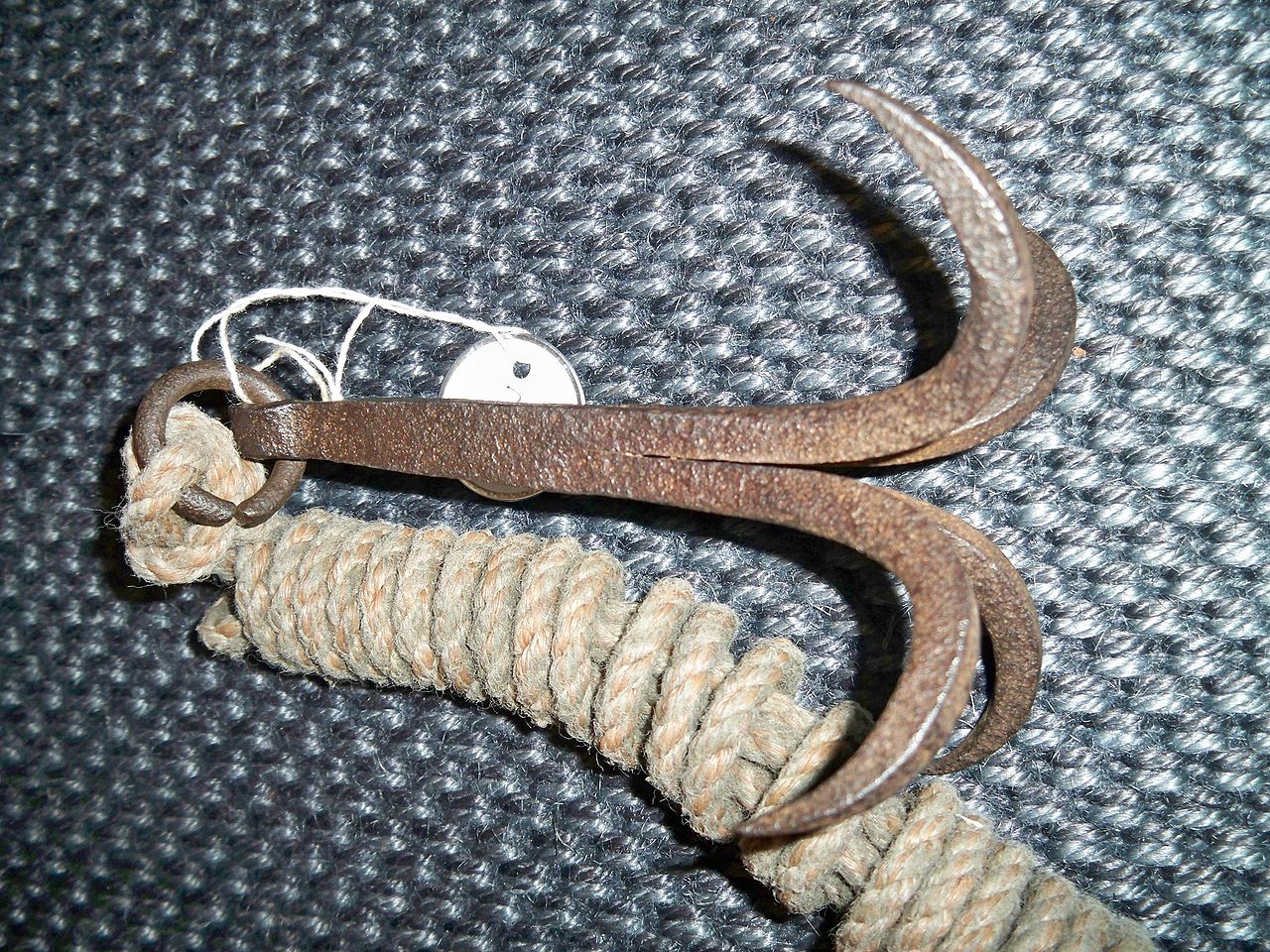 Grappling hooks like this artifact were attached to a ninja's belt.

Grappling hooks like this artifact were attached to a ninja's belt.
The art of ninjutsu included training in specific tools and weapons of the trade. Most of their gear was used for the infiltration of castles and escaping detection but they did use weapons, especially, when the job called for assassination. The weapon of choice was the katana, which was often carried on a ninja's back and could be used for many purposes, aside from traditional combat. The Ten Ryu Hand Forged Carbon Steel Katana is an excellent example of a traditional katana, coming from Longquan, where the best swords in the world are hand-forged by master craftsmen.
Other weapons in the arsenal used by these discreet warriors were shuriken, a collection of sharp items thrown at an opponent, and makibishi or caltrops, which were spiked items, either thrown or dropped on the ground to stop an adversary or a pursuer on horseback. Paul Ehlers, a well-known knife-maker, pays tribute to the heritage of the ninjas with his eye-catching, razor-sharp Two Tone Triple Blade Shuriken. And if you want an idea of what modern caltrops look like, the Caltrop Tashibishi 10-Pack is an excellent example.
Going back to espionage and infiltration gear, the practice of ninjutsu perfected the art of climbing walls, trees or whatever obstacle needed to be overcome. Grappling hooks or kaginawa were the most common and were generally attached to the belt, as well as, ashiko, which are foot spikes, and shuko, which are hand claws. These items could also be used, in a pinch, as weapons against an assailant.

Ashiko are foot spikes that were used by ninjas to scale castle walls.

Ashiko are foot spikes that were used by ninjas to scale castle walls.
Ninja tools of the trade are still being reproduced in today's materials like anodized stainless steel and carbon steel, so, that they are durable and sturdy for modern use. The Ninja Folding Grappling Hook, Hand Claws and Foot Spikes make a great package deal for today's ninjas, who have climbing missions, and the Battle Ready Full Tang Ninja Tech Sword, which has a sleek, ultra modern design.