In a Fight, Who Would Win? Worf or Jon Snow

I love epic battles in movies, television or on the pages of comic books. Nothing is more exciting than two competitors fighting to the death with or without weapons causing major damage to buildings, streets and entire city blocks.

But I also think it's fun to imagine epic battles between characters that are totally unrelated to each other in time period or environment; two characters that could have a battle royale, facing off for no other reason than to see who would win. It's most entertaining when you imagine opponents that are as different from each other as night and day. To me, Jon Snow of "Game of Thrones" and Worf of "Star Trek: The Next Generation" are great choices for my battle. Hmmmm…..who would win? 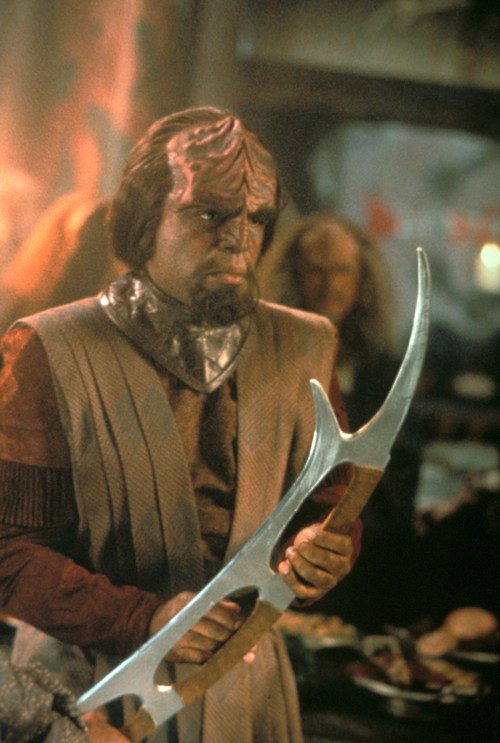 The first thing to consider, of course, is the weapons they will be using against each other. Jon Snow has Longclaw and Worf has his Bat'Leth.
Jon Snow's sword is made of Valyrian steel, which is the best steel you can find in the Seven Kingdoms, It is very precious because the art of forging it was lost hundreds of years ago. Weapons, like Longclaw, are passed down from generation to generation. Swords forged from Valyrian steel are super sharp and strong but also light. It is characterized by its rippled pattern that can be seen on the blade. It is not unlike a Damascus Steel sword, which has the same exceptional qualities.
On the other side of the battle is Worf's Klingon Bat'Leth, which is also a weapon that has been passed down through the generations. It is made of baakonite, which is a composite metal alloy but also has elements in it that are ancient and, therefore, hard to come by today. The folding technique that was used by Worf's ancestors makes it an exceptionally strong weapon with an edge that will stay sharp for decades.
The second thing to consider is where the battle would be pitched – on the bridge of the USS Enterprise-D or in the courtyard of Castle Black."Location, location, location," as they say. If held in the frigid temperatures of the Northern boundary of the Seven Kingdoms, does Jon Snow have an advantage over his Klingon adversary? As Worf's home planet, Qo'noS, has a harsh environment prone to drastic shifts between cold and warm weather, he probably wouldn't blink an eye at fighting in snow and ice. Jon Snow, on the other hand, might be disconcerted at seeing the depths of space from the large viewscreen, located on the bridge or the climate control temperature that would surely be too warm for him and sap his energy as he was fighting.
Both are fierce warriors in their own right but which one of them would have the stronger will to win? Worf was born into basically the equivalent of a royal house in Klingon society and, then, orphaned at an early age. He was then raised by human in a modest farm environment and then he made his return back to his home planet to make his formal declaration of becoming a warrior. Because he was "tainted" by his human adopted parents, he wasn't exactly welcomed by Klingon society. Eventually, he became the first Klingon to enter and graduate from Starfleet Academy and rose in the ranks of Starfleet. Jon Snow was also basically born into a royal house, except, being illegitimate; he was not exactly a full member. He was raised with the family but his only choice of a future was to be shipped off to the Wall where he would live his entire life as a warrior and nothing else. Life at Castle Black was definitely a "school of hard knocks" in a lonely and desolate place, where most of the inhabitants were criminals and society rejects. So, who would want to prove themselves more in battle the shunned orphan or the bastard son?
I think the weapons are both formidable, so, they would cancel each other out as far as advantage goes. As disconcerting as being in space might be for Jon Snow, I think the affects would probably be negligible when it came to performing in combat. Both he and Worg were exposed to adverse family conditions and were trained as warriors, so, I think they share and equally strong will to succeed. I think, folks, what it comes down to is age and experience.